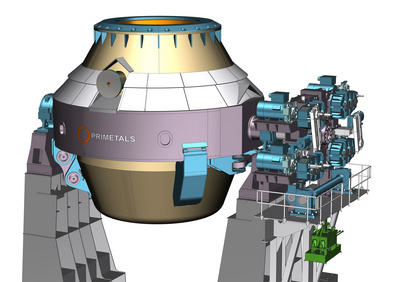 Primetals Technologies has won an order from the Mechel Group to modernize an LD (BOF) converter in the steel works of the Chelyabinsk Metallurgical Plant (ChMK) in Russia. The project aims are replacement of the worn-out equipment, including a further capacity increase by raising the tapping weight and optimizing tap-to-tap times by cutting the melting time. At the same time, the customer will install a new cooling stack and the associated offgas cleaning plant to reduce converter emissions. OOO Rosenergostal, Belgorod will supply this equipment. This will be the third converter that Primetals Technologies has modernized in the Chelyabinsk steel works. The other two converters were successfully brought into operation in August 2011 and November 2013.

The Mechel Group is one of Russia's major producers of steel, ferrous alloys, coal and energy. Mechel is the leading manufacturer of stainless steel, and runs the country's largest integrated production plant, the ChMK, in Oblast Chelyabinsk. ChMK produces a wide range of products, including pig iron, semi-finished steel products, long and flat products, some as large as girders and rails, made of carbon, structural, tool and corrosion-resistant steels.

The new converter is part of an expansion program that includes increasing the annual production capacity of the converter steel works. Primetals Technologies is responsible for the basic and detail engineering, and will supply core components, including the converter, trunnion ring and maintenance-free suspension. It will also replace the tilt drive, together with its AC motors, and implement the associated basic automation. Primetals Technologies will also handle supervision of the installation and commissioning work on site. 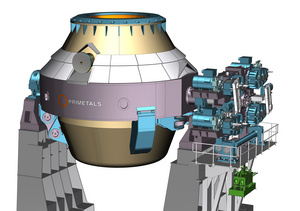 Computer-animated image of the new converter for the steel works of the Chelyabinsk Metallurgical Plant (ChMK), part of the Mechel group in Chelyabinsk, Russia