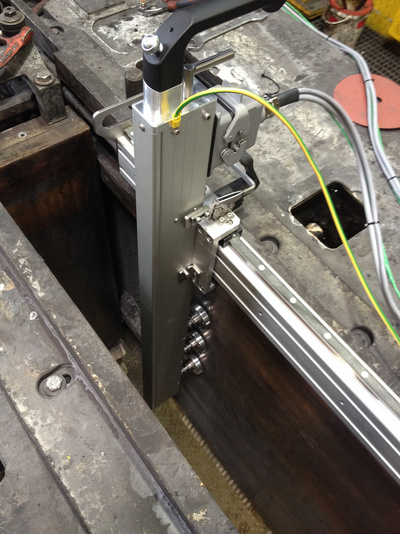 With the Automatic Thermocouple Checker, Primetals Technologies offers operators of continuous casting plants a solution for standardized and reproducible heating and testing of thermocouples in the copper plates of molds. Unlike conventional test methods, for example with the aid of gas torches, damaging of copper plates is ruled out. In the case of the Automatic Thermocouple Checker, heating of the couples is reproducible and is done by electronic means. Each thermocouple belonging to a mold is tested under identical conditions and almost fully automatically. With the aid of uniform heating of the couples, not only defective elements can be identified, but poor thermal contact caused by soiling or insufficient pressing force onto the thermocouple can also be determined. For quality management, the measured data gathered can also be stored for later evaluation.

Temperature distribution in the mold is measured with the aid of thermocouples. It is important that knowledge about this distribution is as precise as possible in order to ensure that any sticking in the mold is detected quickly enough. Such stickers can lead to openings in the cast shell, resulting in damage averaging 100,000 euros. Until now, thermocouples have been tested by various manual methods. In doing so, the individual thermocouples are heated up to different extents, which makes interpretation of the measured results difficult. Moreover, heating of thermocouples can damage the copper plates of the molds.

In contrast with conventional test methods, for example with the aid of gas torches, use of the Automatic Thermocouple Checker rules out damage to copper plates. Alternatively, blow heaters can also be used, but the disadvantage of this alternative is that the lower effective heating output on the copper plate extends the time needed for measurement. The drawback of all manual methods, moreover, due to imprecise positioning or an unequal distance heating up of the copper plate is not reproducible and is not identical for all measurement positions. The Automatic Thermocouple Checker reliably detects defective thermocouples and poor contact between the thermocouple and the copper plate. The computer-aided test process supports optimum installation of thermocouples. This reduces to a minimum the replacement of molds due to defective thermocouples, thus reducing the need for maintenance. For quality management, the measured data gathered can also be stored for later evaluation.

The system's measurement arm is moved to a defined thermocouple column for testing. Then, one thermocouple after the other is heated automatically and the temperature that is reached is measured. Once testing of the complete copper plate is completed, a report is generated to indicate correct or defective functioning of the thermocouples. Narrow and broad sides of molds can be equally tested with the system. It can be used both to test one single mold plate in the workshop and also to check the complete mold.

The Automatic Thermocouple Checker is delivered as a transportable unit. The basic system, which is connected to the thermocouple connectors on the mold, consists of a heating arm that is mounted on a linear guide and a measuring and evaluation unit. 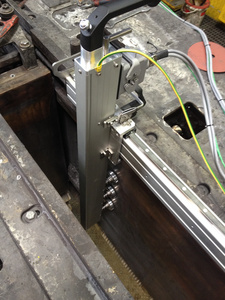 Heating arm of the Thermocouple Checker from Primetals Technologies while measuring functioning of the thermocouples belonging to the broad side of a mold in the installed state. Defective thermocouples and poor contacts can be reliably detected with the system.

Primetals Technologies, Limited headquartered in London, United Kingdom is a worldwide leading engineering, plant-building and lifecycle services partner for the metals industry. The company offers a complete technology, product and service portfolio that includes integrated electrics, automation and environmental solutions. This covers every step of the iron and steel production chain, extending from the raw materials to the finished product – in addition to the latest rolling solutions for the nonferrous metals sector. Primetals Technologies is a joint venture of Mitsubishi Heavy Industries (MHI) and Siemens. Mitsubishi-Hitachi Metals Machinery (MHMM) - an MHI consolidated group company with equity participation by Hitachi, Ltd. and the IHI Corporation - holds a 51% stake and Siemens a 49% stake in the joint venture. The company employs around 7,000 employees.