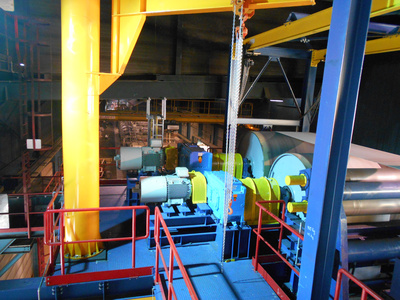 Primetals Technologies successfully realized the modernization of an annealing and pickling line of Aperam Genk in Belgium. The objectives of the project were to upgrade the drive technology and optimize the strip tension control. Under the turnkey project, Primetals Technologies has been responsible for engineering, procurement and supply as well as construction work and commissioning. The upgrade was carried out during end-of-year break in just three and half weeks, followed by fast production ramp-up. The modernized plant went on-stream mid-January 2016.

Aperam operates six production locations in Europe and Brazil, with an annual capacity of 2.5 million metric tons of stainless flat products for a wide range of applications. The company is quoted on the stock exchanges in Amsterdam, Paris and Luxembourg. The most important European production sites for stainless steels are Châtelet and Genk in Belgium, and Gueugnon and Isbergues in France. In Genk, Aperam produces hot and cold rolled AISI grades 300 and 400 in coils weighing up to 45 metric tons.

For the upgrade, Primetals Technologies supplied new electrical equipment, such as automation material, motors and drive for the annealing and pickling line. This included 30 main drives for the entry section, the pinch rolls, the bridle rolls, and the exit section. A total of 99 geared motors were also installed, for example for strip transporting at the conveyors, the furnace and the pickling plant, as well as for the paper winders and unwinders. 25 adaptation frames for new motors and existing motors were installed, as well as17 new gear boxes including their adaption frames. The reducer units for the pinch and bridle rolls were replaced. The coilers and uncoilers retained their gear units. These measures increased the processing speed of the line from 100 to 120 meters per minute.

At the same time, thehead and tailing-out speeds in the entry and exit sections were prepared for an increasing from 20 to 50 meters per minute. To increase the capacity of the three loopers, their length was extended and new dolly cars and winches were supplied. The two existing loop pits were removed, and were replaced by new bridle rolls and an advanced tension control system. At the entry of the line, a new pinch roll was installed. Also, an additional bridle roll was installed and an existing one replaced.

Primetals Technologies also improved the strip tension control and strip stabilization on the line by modifying the plant layout. The strip looper was decoupled, and new components installed upstream of the furnace entry and the entry into the pickling section. Furthermore, the plant was equipped with a new strip tension measuring system required for strip tension control. 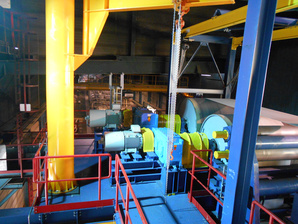 Modernized bridle area of the annealing and pickling line of Aperam in Genk in Belgium which was modernized by Primetals Technologies.