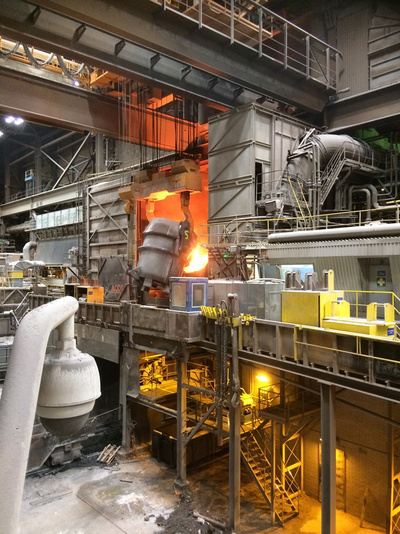 AOD converter modernized by Primetals Technologies started up at Outokumpu in Tornio, Finland

In December 2018, the no. 1 AOD converter modernized by Primetals Technologies was started up at the Tornio works of Outokumpu Stainless Oy, a Finnish stainless-steel producer. The project involved fitting the converter with a new tilting drive, trunnion ring and other associated equipment, including the electrical installations and automation. The Vaicon Drive Damper system developed by Primetals Technologies was also installed on the tilting drive. It reduces the vibrations produced by the blowing processes and thus the mechanical loads acting on the entire system from the converter down to the foundations. The patented system reduces wear and maintenance costs while also lengthening the service life of the plant. It can be installed in new plants or retrofitted on existing converters.

Outokumpu is one of the world's leading producers of stainless steels. The company employs around 10,000 people in over 30 countries, and has its headquarters in Helsinki, Finland. The works in Tornio, Lapland, is an integrated production complex with a cold rolling capacity of 1.2 million metric tons per annum. The chromite ore used in the works comes from a mining operation in nearby Kemi, which is also run by Outokumpu.

Primetals Technologies was responsible for the planning, manufacturing and supply of the new converter equipment. This covered the trunnion ring, tilting drive, including the damping system, the rotary joint and the pipework. The scope of supply also included the level 1 software and hardware for the tilting drive and damping system. The major components are a safety PLC, remote IOs, frequency converter, local control pulpits, engineering station and a process data recording system. The process images required for visualization are integrated into the existing control system. Primetals Technologies also handled supervision of the installation, commissioning and start-up of the AOD converter.

The AOD (argon-oxygen-decarburization) refining process is used to produce stainless and high-alloyed steels. Large quantities of oxygen, argon and nitrogen are injected laterally to mix the bath thoroughly and minimize the unwanted slagging of alloying elements. This process-related lateral injection during the refining process sets the bath and the several hundred metric tons of the AOD converter in vibration. This causes dynamic stresses, which reduce the service life of the mechanical components of the plant, and increase the amount of maintenance required, especially on account of premature wear on the bearings and gearing of the tilting drive.

The Vaicon Drive Damper developed and patented by Primetals Technologies reduces the induced vibrations and the associated mechanical stress on the converter mechanism by more than 50 percent. The damping system consists of two hydraulic dampers developed jointly with Hainzl, an Austrian company, as well as measuring systems, and evaluation and control software. The dampers are installed parallel to the torque support of the converter tilt drive, and are driven independently of it. This design ensures high availability and also makes it easy to retrofit in existing plants. Each damper has a closed hydraulic circuit, which makes an additional, external hydraulic system unnecessary. The damping effect is achieved by means of an electrohydraulic proportional throttle valve, and is therefore continuously adjustable. The thermal energy generated by the damping is dissipated by an integrated water cooling system.

The dampers are equipped with a position measuring system as well as pressure and temperature sensors. All process data – such as vibration displacement, temperature, pressure and damping force – is recorded and evaluated by software developed by Primetals Technologies. This facilitates a fast, effective response to the momentary vibration state of the converter. 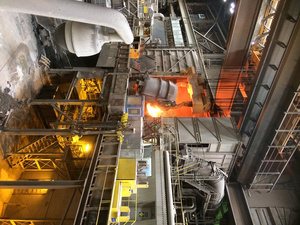 Primetals Technologies, Limited, headquartered in Frimley, Camberley, United Kingdom, is a worldwide leading engineering, plant-building and lifecycle partner for the metals industry. The company offers a complete technology, product and service portfolio that includes the integrated electrics, automation and environmental solutions. This covers every step of the iron and steel production chain that extends from the raw materials to the finished product – in addition to the latest rolling solutions for the nonferrous metals sector. Primetals Technologies is a joint venture of Mitsubishi Heavy Industries (MHI) and Siemens. Mitsubishi-Hitachi Metals Machinery (MHMM) - an MHI consolidated group company with equity participation by Hitachi, Ltd. and IHI Corporation - holds a 51% stake and Siemens a 49% stake in the company. The company employs around 7,000 employees worldwide. Further information is available on the Internet at www.primetals.com.